WordPress provides its users with a very comprehensive statistical analysis. For example,  I know that 32 people looked at my blog home page today.  That is pretty surprising to me because I really thought only about 5 people ever actually read this in any given month.  So, where is all this extra traffic coming from?  Well, WordPress tells me that people are coming across my blog using the following search terms: 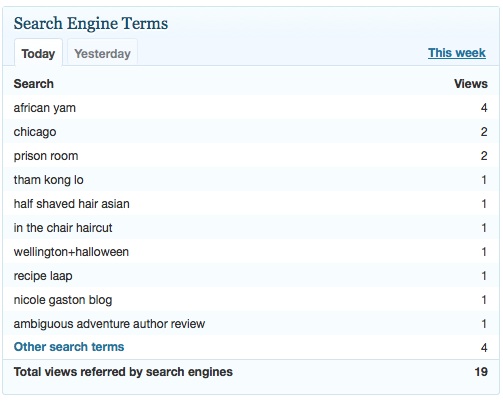 Of those search terms, people clicking on my blog approximately 80% of the time will be sorely disappointed.  Especially those people searching for Chicago, as the post in question is basically all about Wellington and some stupid TV show I watched.  I literally have no idea how my blog could possibly provide a hit for the search term “prison room”, but apparently it does.  Other than those searching for “recipe laap” and “nicole gaston blog”, I don’t think I really have anything to offer besides my extremely irrelevant opinions.   But hey, at least I can somewhat articulately express those irrelevant opinions!

My internal clock tells me that October is the autumn, and I should be eating pumpkins, cranberries, and baked apples.  In New Zealand, it’s spring time, but I did some autumnal baking last week anyway.  Me and my office mates ate everything too quickly to get any photos, but I have transcribed some of my recipes.  Here they are for you to enjoy.

This has become my “go-to” muffin recipe.  If I don’t have soymilk on hand, I use regular milk, which works fine.  To make my autumn cranberry pumpkin muffins, I followed the recipe  as written, however omitted the rolled oats and coconut, used 1 cup mashed pumpkin instead of banana, and added about 1/2 a cup frozen cranberries (you should probably cut the berries in half before adding them to the mix, though I was lazy and didn’t), and about 1/2 cup of dried cranberries.

As I mentioned previously, I hate Facebook but I love bicycles and Halloween.

So I was excited when I saw this flyer:

Previously, when I tried to find any information online about Critical Mass in Wellington…. I thought there wasn’t one.  First, try googling “Wellington Critical Mass”.  The best result is the NZ Critical Mass website, which seems to be based in Auckland and doesn’t give many details about Wellington’s event.  You could show up and be the only person there.  In addition, the “Cycling in Wellington” site barely makes a mention of Critical Mass, and nothing about this week’s ride as of today, Wednesday 26 October.  It’s not listed on the events calendar nor are any details given.  So, if you’re just a lonely girl with no cyclist friends but you want to participate in bicycle activism what are you to do?  Well, if you are lucky enough, you’ll come across a flyer in an op shop in Newtown, and know about the event even if the details on the international network are scarce.

However, upon closer inspection, the flyer directs me to… my favourite website in the world, Facebook! So, again, the insular nature of Facebook comes back to haunt me.  I can’t find details for Wellington’s Critical Mass because I stubbornly refuse to join Facebook.  Why is it so hard to post information about the event that is freely available without having to register for a website who’s privacy policy is unsettling to some people?  I said previously that if I could only find out about an event via Facebook, I probably wouldn’t want to participate in that event.  I’m not really a hypocrite or making an exception for this event, as I did get an actual print flyer with the details on it.  At least that is what I am telling myself.

Here are some pictures from the last Halloween Critical Mass ride I went on, I’ll try to get better ones this year.

Well it’s been a while since I have written anything and I feel remiss in my blogging duties.  If only I could be as prolific as Cameron, alas, I don’t have any Pumpkin Regattas to attend or Canadian political commentary to share.  I apologise, but hope my dear readers don’t mind too much.

Since I returned to Wellington I have been filling my time transcribing interviews that I conducted in Laos, which thus far has been a time consuming, tedious task.  And I am less than half way through.  But I am making progress and slowly plodding my way through this PhD.  In addition to spending hours listening to audio interviews and trying to avoid repetitive strain injury to the 3 fingers I used to type, I am working on a few projects around the house.  So far, the big one is my Halloween costume.

Coming up with a Halloween costume idea was the trickiest part for me this year.  Several years ago I spent literally MONTHS and hundreds of dollars on a Marie Antoinette costume, only to return from a holiday (in France of course) on Tuesday October 30th, missing all the Halloween parties that had happened the weekend before.  At around 5:30 pm on Halloween I rang up all my closest pals and insisted the come over to my house immediately for a Halloween party with a costume, and if they didn’t have one, I would put something together from the contents of my wardrobe.  It ended up being a French maid, and  voyageur, among other costumes.  That impromptu Halloween party was one of the funniest of my life, and involved Trick or Treating at 2 am, receiving only a cough drop and a condom.  I have not worn the Marie Antoinette costume since.

However, this year my principle constraint was price – I didn’t want to spend ANY money on my costume.  In the end I think I will end up spending $15, which I used to buy silvery sequin fabric that I intend to make a jacket out of.  However unlikely, I have convinced myself that I may wear that jacket again on another occasion, and therefore, is a worthwhile investment.  I also made a hobby horse which I may give away to a small child after Halloween as I probably will have no use for it ever again.

It’s hard to get motivated for Halloween when you don’t have any events to attend.  Which is why I was delighted to hear about Wellington’s Halloween Critical Mass ride, when I saw a flyer at Opportunity for Animals last weekend.  I have only been on critical mass rides about 3 times, and 2 of those were Halloween rides.  So I suppose it’s some kind of tradition for me to participate in Critical Mass once a year, in October. I have also been invited to a party at a friend’s house.

Once I had identified the occasion, the ideas began to flow.  Before I had any specific engagement in mind, I considered being a zombie Amy Winehouse, vampire bunny rabbit, or Alice in Wonderland.  Unfortunately, the problem with being a woman and wanting to dress up for Halloween is that you’re supposed to be “sexy”.  The following image is a pretty accurate interpretation of this type of thought:

I’ve always secretly wanted to dress up as a giant burrito or something equally un-sexy.  I considered wearing a burqua this year… except that I would have had to go out and buy 3 meters of black cotton and was basically too cheap to do so.  So, after recalling a Halloween critical mass ride years ago in Montreal, I had the idea to decorate my bike like a horse, and make myself a circus performer costume.  After spending all day yesterday making myself a pink ballerina-y type dress, I realised I already had the perfect yellow silk circus girl dress hanging in my closet, and a pair of blue and white stripped bloomers!  So, All that is missing is the jacket, which I will hopefully finish up the next day or 2.  I will post photos of the completed project… which hopefully won’t be too sexy.

Recently read an article in the New Yorker about Jaron Lanier and his views in Facebook.  According to the article’s author, Lanier’s book “You are not a gadget” provides a critique of “social-networking sites like Facebook and Twitter, which he has described as dehumanizing and designed to encourage shallow interactions”.  I strongly agree, and use this as further evidence to back up my anti-Facebook position.  Unfortunately I’m not as clever or articulate as Lanier, so in my recent rant I wasn’t able to come up with such compelling arguments against the use of social networking.  However, after reading that article, I was inspired to delete my Google+ account, although I still have yet to read Lanier’s actual book.

A Slate.com article about Lanier reminds readers that “we can easily forget that Facebook needs to build a profit with our friendships”.

I think is essentially my issue with sites like Facebook and Twitter, although I didn’t express myself as well as Lanier does.  These sites do not encourage meaningful interactions.  They want to make money from our relationships and our communication, but with less transparency than a telephone company or post office.

Facebook allows you to “network” with other “humans”, but really, how much time and effort do these people put into their social interactions with you via Twitter or Facebook?  How long does it take to click on a “Like” button? And what extraneous information are we exposed to when we communicate with each other using Facebook?  The situation is convoluted even more by that fact that many advertisements are designed to intentionally mislead users.  I often wonder whether or not people are even able to distinguish between advertisements and legitimate information on the internet.  It’s certainly not always easy.

I agree that the types of interactions upon which Facebook and Twitter are built are shallow and dehumanizing, and I would even argue that this has begun to influence the way people process information.   It’s true for even myself, a non-Tweeting non-Facebook user.  I am compelled to interact with information as efficiently as possible; trying to glean as much useful information as possible with minimal effort.  Perhaps this is just because “information explosion”, and the amounts of information we are expected to interact with on a daily basis.  The only way to cope is to learn how to process information efficiently, or you end up feeling overwhelmed and bewildered.  Which is why I think it’s so important to put effort into maintaining relationships and genuine communication; that’s what makes us human.

Which leads to another set of existential questions… does information exist independently of humans?  Or must it be interacted with in order for it to be information?  If a tree falls in the forest, and no one is there to hear it, does it make a sound?