I am taking a break from working on a Marsden grant application to write about this week’s “New Yorker Out Loud” podcast.  Jonathan Franzen and Blake Eskin discuss Edith Wharton’s work, relating to an article about her in the current issue of the New Yorker.

I have yet to read the article, but listening to the podcast was a revelation in itself.  I had never really considered the themes that run throughout Wharton’s work, as I read her novels at different periods in my life.  The first Wharton novel I read was “The Buccaneers”, after seeing the mini-series version of it in 1995.  I was a 16 year old girl, and I fell in love with Wharton’s heroines and beautiful prose.  Sometime later I read “The Age of Innocence”, which was an equally affecting and beautiful story.  The movie version, with Winona Ryder and Daniel Day Lewis, is also excellent.  The vividness of Wharton’s descriptions of 19th century New York society resonated in me.  Franzen describes her characters as being imprisoned in a sense, and experience profound disappointment. Even though it has been years since I read the book or saw the movie, I still retain the image of Newland looking up at the striped awning of Countess Olesnka’s window, and turning and walking away.  It was heartbreaking to me then, and I guess still is today considering how vividly I remember it.

I left Wharton alone for a few years, until recently, when I was inspired to read “The House of Mirth”.  Again, I found the story, despite being written a century ago, described contemporary issues about the nature of happiness and fitting in, for lack of a better word.

Franzen describes reading The Age of Innocence as a 20-something, and then going back and re-reading it in his 40s, and how different it felt to him.  I haven’t read it in a decade, and I may well take his advice and re-read some of my favourite work by Wharton.  Each of her stories is unique, but, as Franzen puts it, are essentially “lessons in relentlessness”.  The characters of her novels are relentless – yet ultimately, the meet with failure.  A harsh truth about the nature of society that really resonated with me as 16 year old, and still does, to a certain extent today.

Hey homeboys and girls,
I have posted some photos from Camp A Low Hum, but have yet to fully processes the magnitude of the event and the mind-blowing experience it was. Full details to follow when time permits. 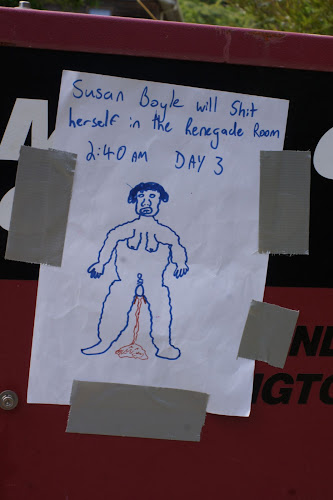 I posted some photos from Laneway on Picasa.  It was an amazing day full of amazing music.  Thanks mom for the ticket!

A full recap is coming soon!