Can’t see anything
Ridiculous queues for toilets
Disorganised staff never responded to my volunteer application
30 C and no shade (and no umbrellas/parasols allowed!)
Most artists only get 30 minute sets
Drunk teenage girls puking everywhere (at one point simultaneously 1 meter away on both my left and right sides)
You can’t bring “branded” food in (wtf?!)
$$$$$$$$

I don’t know why such awesome artists keep agreeing to play because seriously this festival is such shit, I’ve said it before but when you booked Belle and Sebastian AND St. Vincent I couldn’t resist… But seriously, NEVER AGAIN.
It’s become a lowest common denominator/sell as many tickets as possible scenario that self respecting music fans should actively avoid.
Or maybe I’m just old and jaded and full of hate?

I posted some photos from Laneway on Picasa.  It was an amazing day full of amazing music.  Thanks mom for the ticket!

A full recap is coming soon!

I just got back from a trip to Auckland.  This was my first opportunity to leave Wellington and see another part of New Zealand.  I have to say…. it wasn’t mind-blowing.  While Auckland did seem more like an actual city; compared to Wellington (the village with an over-inflated ego), it wasn’t particularly interesting.  Admittedly, I was only there 2 days, and didn’t see much beyond the CBD.

I really didn’t have any expectations, so I wasn’t really disappointed or excited by Auckland.  The one thing that constantly surprised me was the number of East Asians, and the Asian influence apparent throughout the city.

Several months ago, when I was spending quite a bit of time with a group of Lao ESL students studying here at Victoria, they went on a group trip to Auckland.  When they came back I asked them if they had liked their visit to Auckland.

“No.” responded one of them.

“There were too many Asian people.  I like to see more white people.”

Now I understand what he meant.  A significant portion of the signage in the CBD was in English and Chinese, not to mention Japanese and Korean.  While I didn’t see any Thai, or Vietnamese, those were pretty much our only food options, alongside the Chinese restaurants, sushi places, and Korean pancakes.  Irregardless, I totally pigged out and am now on a strict no-junk-food diet.  Visiting the shopping centres downtown I had to double-take to make sure I wasn’t actually in a fancier version of Vientiane’s Talat Sao Mall, or even more similarly, the Platinum Shopping Centre in Bangkok.

Our main purpose for going to Auckland was to attend the Laneway Festival.  Overall, I have mixed feelings about the festival experience.  At $112 NZD, it was an expensive event for me.  However, the lineup included a number of bands that appealed to me, including Holy Fuck, Ariel Pink, Blonde Redhead, Deerhunter, and Beach House.  And those were just the bands I had heard of!  I discovered Warpaint, Foals, Ladyhawke, and Yeasayer thanks to the festival; all of whom I genuinely enjoy.  I appreciated the Auckland summer weather – comfortably warm.  I have awful memories of the intolerable heat of Pitchfork festival in Chicago in July, 2006.  The booze was pretty reasonably priced and the crowd was pretty friendly and enthusiastic. However, the sound was way too loud, even with ear plugs.  I came to some conclusions based on the following observations:

My conclusions are that they were exhausted and tired of performing by the time they got to Auckland, and unfortunately for the audience, the festival experience wasn’t as great as it could have been, or would have been if we had seen these acts individually.  This is also evidenced by a comment made to me by Bradford Cox of Deerhunter, who I begged for a photo with after their uncharacteristically banter-less set.  He commented that we would have liked to hang out but was too exhausted and had bags under his eyes.  Having seen him play (as Atlas Sound) in Montreal in 2009, it was obvious he hadn’t really put much heart into his performance in Auckland.  That seemed to be the case with most of the artists, the exception being Yeasayer, who put on quite a lively show. I was really hoping for some wacky antics from Ariel Pink… but was sadly disappointed (though Ticker maintains that Ariel Pink was drunk for the duration of their set).

Anyway, it sure was fun to get to see so many good bands play all together in southern hemisphere, and get hugs from both Lockett Pundt and Bradford Cox! 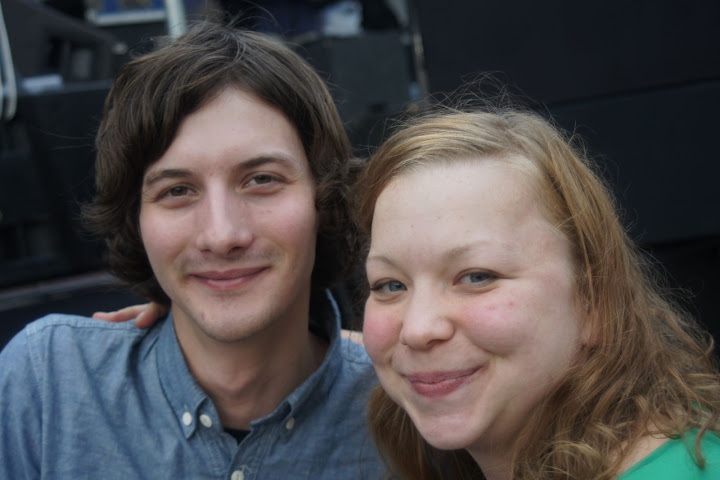 Lockett sure is dreamy… 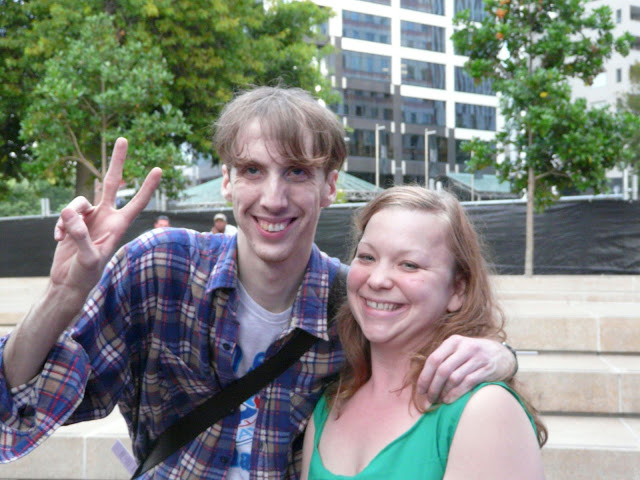 Despite being exhausted, he still gave the camera a big smile.  What a nice guy!

I have posted a number of pictures from both the festival and Auckland on Picasa.