I just saw this gorgeous book:

The book is full of amazing olde-timey patterns like these sweet spats:

I want to make them!!

I’ve been secretly desiring a pair of spats for ages and almost bought some in Montreal in August, except they were polyester and cheap looking.  Now, a pattern so I can knit my own!  Hooray!

How cool are spats?

Here are some images for inspiration: 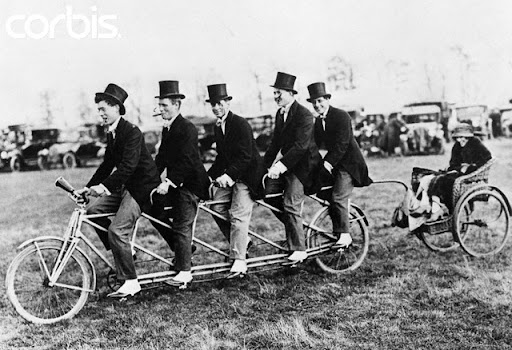 I know it might seem like a bit too much and borderline goth/steampunk, but I think it’s a reasonably wearable look.  However, I am lucky to work in an environment that is pretty flexible as far as what is considered appropriate dress.

That being said I have been a big fan of 19th century saloon-girl style since watching Deadwood… I’ve always dreamed of having the time and patience to buy this Laughing Moon saloon girl pattern and make it:

I find something appealing about the idea of wearing a bustle! However, that being said, I am so happy to live in a Western country in the 21st century when women are basically free to wear whatever they like.  Having to wear a corset, ankle length skirts and high collared tops everyday would not have been comfortable.

So, earlier today I was working in my office and listening to the Venus podcast as I often do.  I wanted to take a short break from information behaviour in geophages (Chatman, 2000) and had a look at the Venus blog where usually some interesting photos and videos have been posted.  I saw a link to a video for somebody called “Mykki Blanco” and clicked on it after having looked at some of the other videos.

The video in question is for a song called “Wavvy”.


I think it was playing in the background while I was on the phone and then I saw a second of it and thought “Hrm…that guy looks familiar”.  So I stopped it and played it back from the beginning.

Is that Michael Quattlebaum? I thought to myself.
So I Googled “Mykki Blanco”, and found this article.

YES.  Mykki Blanco is Michael Quattlbaum, AKA, the asshole I used to live with.

It’s still kind of blowing my mind that the dude I used to live with is now some kind of minor celebrity.

In December 2005, when I came back from Peace Corps Benin, I got a job at a call centre in Rosemont and moved with with a friend of a friend in a place on Cermak in Pilsen.   The friend was Jail, who was a bandmate of Vanessa, one of my oldest and dearest friends.  For $150 a month each, Jail, me, and 4 other people shared a 3 bedroom apartment that we called “The Beauty Shop”.  It was upstairs from a real beauty shop, run by a Mexican trans woman, and we would have band play in our tiny living room.  One time Juiceboxxx played there.  Unlike Michael, Juiceboxxx was really nice and awesome.

I think Michael was like 18 or 19 at the time and a student at the Art Institute of Chicago, which is a pretty prestigious art school for young pretentious rich kids.  He had already been living in the apartment with Jail when I moved into my room which was no bigger than a twin size fold-up bed and the space to partially open the door.  One of Michael’s friends from California, Kendra, lived in the closet.  Jail lived in the pantry.  Chase lived on the couch in the living room and Rita had a real bedroom, as did Michael.

After a few months Rita moved out and Amanda moved in.  There was never really a quiet moment, and the house was always filthy but it was really fun living in Pilsen at that time.  Just a few blocks away was Vanessa and the people at “Tha Blog Cabin”, down in McKinley park was the Junke Shoppe, and Liam and his roommates lived around the corner as well.  Sometime that year some kids also moved into an old flower shop a few streets away and started having shows as well.  It would have been amazing except I had a terrible 9 to 5 job that I hated and a 2 hour commute everyday.  But, after having been away from America for 2 and a half years I was really enjoying being in Chicago and close to my family again and part of a community of creative people doing interesting things.  I bought a sewing machine and took accordion classes at the Old Town School of Folk Music that year.

Michael always comes up when I swapping “worst roommate ever” stories with people I know.  Luckily I’ve never had a roommate steal my stuff or shit in my bed or anything. But Michael did something almost as bad after living with us for a few months.  Before moving out he demanded his full security deposit back and insisted on using it as his last month’s rent.  Failing to understand the simple maths involved we tried to explain to him that a.) he broke a bunch of shit and didn’t deserve his full security deposit back and b.) he actually had only paid $100 in security deposit which didn’t cover the entire portion of his rent for the month.  Nevertheless he would not listen to reason and refused to move out or pay rent, and then to make matters worse, he had his MOM call Jail to argue on his behalf.   His mom accused the remaining roommates of trying to take advantage of her son.  Rather than dealing with the rent himself he had his mom try to intimidate and threaten the rest of us.  The 4 remaining roommates then had to pay extra money to cover his rent and were forced to live with him for a full month at our own expense, basically subsidizing his existence despite the fact he had rich parents who could have easily paid his rent.  That was what left us all feeling quite bitter.

Later I heard a story from a friend who’s landlord rang him up one day a few months later and said “Some rich kids want to pay double the rent you’re paying for your loft, so you have to move out next month”. When the rich kids turned up to look at the loft apartment, it turned out to be Michael and his art school friends, and my friend had to move out. There might be some exaggeration in that story but that is how it was told to me and I wouldn’t be surprised if it were true.

One of the less annoying but more funny stories was the one where I came home late one night and after locking my bike up I realised there was some kind of campfire going on in the backyard.  Getting closer I realise Michael and the other roommates were sitting around it naked, and then the invited me to join them.  I respectfully declined, and then later again that night a roommate came inside and tried to persuade me to join them in sitting naked around the campfire.  I think this was on a Tuesday night, and I was tired and grumpy and had to work the next day.  I said no, at the time.  If that happened to me again tomorrow, I might say yes this time.  It’s important to keep in mind this was in Pilsen, on a busy street with houses on either side, and our backyard was about 4 meters square.  I did find it funny at the time, and this incident is not what qualifies him, in my mind, as my all time worst roommate ever.

One of the more annoying things about Michael was that he and his friends threw a party, left a used condom in my tent that was in the back yard and burned cigarette holes in it.  I suppose it wasn’t really his fault; I probably shouldn’t have just left the tent out there for 2 weeks or however long I left it there, but I still like to cite that as evidence of him being a bad roommate.  There are other stories not really worth repeating, usual annoying roommate stuff like not washing the dishes or buying toilet paper.

But whatever, he was young back then.  I do also remember him introducing me to good new music and lending me a White Sox cap to wear to a game once.  He could actually be a pretty cool guy, except when he invited around his art school friends.  I have to admit that it almost annoys me that he is now semi-famous; because he was such a pretentious little shit back then.  However, that’s just my opinion and I don’t really want to trash talk anybody. Especially some one advocating for gay and trans people who seems to be semi-articulate and intelligent.  He moved out early in the summer of 2006 (under the not-so-wonderful circumstances I described above), and in August I left Chicago to start my MLIS at McGill.

This is a picture of Michael in the kitchen of our apartment.

Thinking back, I’d like to give Michael the benefit of the doubt.  He may have just been young and stupid and it may even have been his first time living away from home and sharing a space with other people.  I was once probably an asshole roommate as well.  Who knows, maybe I still am!?!

One of my favourite cycling events of the year, Halloween Critical Mass, is quickly approaching (26 October).   Before it gets too late, I wanted to start thinking about bicycle-related costume ideas.

Last year I was inspired by this bike-riding cowgirl from a Montreal critical mass years ago to decorate my bike like a horse and dress up as a horse-back riding circus performer like one of these fabulous ladies:

Though I wouldn’t dare attempting such tricks on my bike. 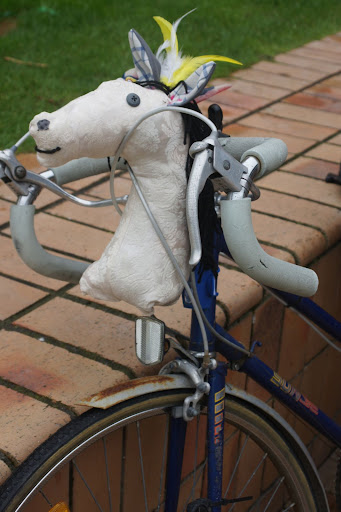 While I like the “bike-as-horse” idea, there are so many more options.  At last year’s ride we had an awesome Harry Potter Quidditch duo on bicycle-broom-sticks, a bee on a bike, and Bananas in Pyjamas on a tandem! 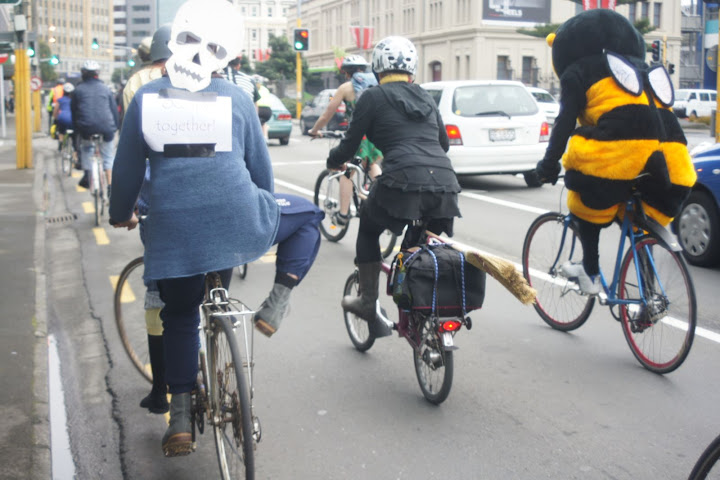 (Among other great costumes)

But, what to do for this year?

Rather than actually doing any work on my thesis I have been scouring the internet and my brain for ideas.  Here are a few I have come up with.

Tracy Morgan dressed like a cellphone riding a bike.

Peewee Herman, on his beloved bike!

David Byrne, looking dapper as always with his bicycle.

I must stop for a moment and brag about the fact that once I met David Byrne.

Or, better yet, the paperboy from Better Off Dead?

The Wicked Witch of the West… you even get your own theme music!

Data from The Goonies… or go as any of the Goonies!

Miss Piggy, Kermit the Frog, any of the other Muppets on bikes.

Kevin Bacon from Quicksilver. I have never heard of nor seen this movie but it could be a cool look for fixie riders!

How about a singing bicycle riding nun?!

I am hatching an idea that I do not intend to give away here lest some one steal it, but if you have any other suggestions please contribute!