On Saturday I went to a Bascii ceremony for the wife of one of the people I work with at the library.  She got a visa to go to America, and is moving to Rockford, IL for a year.  So, they had a big celebration at their house.  I missed the ceremony part, because I had to teach, but I invited one of my students to come with me, and we had a lovely time!  Even though there was no electricity or water, they trucked in a generator and there was a live “band” performing.  Lots of Lao Lavong dancing, and the usual Lao line dancing happened.  I drank a lot of Beerlao with some old men and then went home and fell asleep at about 7 pm.

And then on Sunday, I went over to my friend Luck’s house, where they were having a Chinese New Years celebration.  Luck had told me to come there at noon, but I had some stuff to do around the house, and my bike had a flat tire, and I accidentally left my phone turned off, and at around 12:45 some one came knocking on my door.  It was Luck, insisting that I go to his house as quickly as possible.  I assured him I just wanted to finish drinking my tea and I would be there soon.  When I finally got it together to leave Luck’s sister had already called me like 4 times to find out what I was coming.  I showed up at Luck’s house around 2:00, and everyone was SUPER MAO already.  This is how they celebrate Chinese New Years in Laos:

Boys getting shirtless and trying to flex their muscles! It was a lot of fun, but somehow I managed to pull myself away by 6 pm, as Monday mornings following a the typical sunday Beerlao drink-a-thon tend to be rough.

Speaking of Beerlao drink-a-thons, now would probably be a good occasion to discuss Lao and their love for the Beerlao.

In Lao culture, nearly everyone drinks.  It’s OK for women to drink, and they like to.  There are two main ways in which beer is drunk.

1.) The “sophisticated” method, and

In the first method, a large bottle of Beerlao (660 ml) is placed on a table, or in the middle of a mat on the floor if no table is available.  Everyone drinking has their own glass.  Somewhere near the centre of the table is a cooler, bucket, or bowl of ice.  The beer is poured into everyone’s glasses along with a few ice cubes, and everyone drinks at their own pace and refills as necessary.  Usually it is a pretty young girl or “Pusao” who does the pouring, carefully being attentive to the drinking paces of all of the other drinkers, and refilling everytime your glass is less than 3/4th full.  When the bottle is empty, it is replaced with a full bottle, and the cycle continues, sometimes for hours and hours.  Usually some food is involved at some point.  Every 3 to 6 minutes some one will say either “Sokdee!!” or “Nuoc!”  which mean “good luck!” or “drink!” respectively, at which point everyone is expected to clink glasses, or “cheers”.  The Lao love “cheers”.  Occasionally, some one will say either ‘Moot!” or “Ha sip!”.  “Moot!” means “it’s time”, in which case you are expected to down your entire glass of beer and then pound your empty glass down on the table.  If you cannot or do not want to “Moot!”, you can say “Ha-sip!” which literally means “50”, meaning “I will drink 1/2 (50%) of my glass”, after which you must again cheers with everyone present.  If your fellow drinkers don’t think you are keeping up well enough, they will encourage you to drink more by pouring your glass entirely full and yelling “Moot!” after each refill.  If you cannot keep up, you may get some comments about not being “strong” and will probably be humorously harassed until you drink enough to satisfy your friends.

In the second method, one glass is shared among a group of people.  One person acts as the pourer, or “presenter”.  He or She puts some ice, and about 200 ml of beer into a glass, and shows it to everyone, as he or she says “Senou”, or “I present”.  The presenter then chugs the beer as quickly as possible.  He or she then refills the glass with a simmilar amount of beer, or more or less, depending on how he or she feels, and hands it to the person next to him or her.  This person then downs the glass in one go, and passes it back to the presenter.  The presenter then refills the glass, adding ice if needed, and passes to the next person in the circle, until it comes back to the presenter.  More bottles of beer are opened as needed as the glass is refilled.  When it reaches the presenter, he or she “Senou”s again.  However, it’s a bit more complicated than this.  If you have a large group, you may have several “presenters”, thus several glasses going around at once.  Often you may find yourself double-fisting two glasses of beer at the same time, and be expected to down one right after the other.  Or, if some people are slow drinkers, you may wait 10 minutes to get a glass.  Also, any of the drinkers can claim “Baw Senou!” at the beginning of a round, meaning, “I didn’t see you “present”, now you must do it again”, causing the presenter to drink a second glass. There are also some tricks to getting out of getting too drunk – if you see a glass almost on your way, discretely run to the toilet to escape!  Chances are everyone will be so drunk they won’t notice that they skipped you.

Regardless of which drinking style you find yourself engaged in, you will surely get drunk, and the beer is always served with ice.

My Vientiane blues are gone for the time being, and since everybody knows I like food, both preparing and eating it, this post is about some of the culinary delights of Laos.

Cameron told me that the only thing he knew about Laos was that they had no food taboos. Whether or not this is true, I am not certain, but as far I can tell, they eat pretty much anything and everything here.

Dr. Dan asked Mr. Chansy if the Lao eat dog, like they do in Vietnam, and Chansy responded that “We wouldn’t cook it for foreigners, like the Vietnamese do.” Today I ate some deep friend beef skin. I didn’t like it, and Chansy kept urging me to eat it, and finally I said I didn’t want any. When he asked why, I said “It tastes like how cows smell.” I don’t know if that made sense to him, but that is exactly how it tasted. I also got served some beef tripe, which I declined to eat. I have been generally good about eating anything and everything they serve me, as strange as it may be, but even I have my limits.

This is a picture of the typical Lao sandwich they sell at the Talat Sao (Morning market) where I take the bus every day. As you can see from the picture, they put some kind of furry stuff on it that tastes salty and kind of fishy. It also has cucumber and white spam in it, and comes wrapped in some kid’s homework, or some bussiness man’s report. A small one is 20 cents, a large one is 50 cents. Sometimes I have one for breakfast, sometimes when I get back from the University on my way home in the afternoon.

The Lao eat a lot of glutinous rice, or “sticky rice”. It’s so delicious. Usually it comes served in a little wicker basket, but actually I have no idea how it is prepared. One strange thing the Lao really like, which I think actually comes from Thailand, is corn in sweet things, like Corn Ice Cream, Corn Yogurt, and Corn & Coconut Custard. It sounds disgusting but actually it’s really good. They also eat a lot of green papaya salad. Most Lao cuisine is influenced heavily by Thai food, with a few small differences. The Lao put fish sauce in their papaya salad, which I am not a fan of. Regardless of whether or not you get Lao or Thai style green papaya salad, it’s HOT. Imagine just eating some hot salsa fresca straight out of the bowl with a spoon at your favorite mexican restaurant, that is what eating green papaya salad is like. Hopefully you can get it served with a nice Beerlao on the side to cool your mouth down between bites.

Around my house there is an excellent Vietnamese style restaurant (but they don’t serve dog…. at least I don’t think they do…). You can get a plate of “make your own spring rolls” for about $2. This includes huge plate of lettuce, cucumber, bean sprouts, fresh sweet basil, and fresh mint. You also get some grilled pork sausage, rice noodles, and some rice paper. Then you break everything into little pieces and roll it up into the rice paper, and dip it into a sweet peanut sauce. They also have delicious bowls of rice noodles with peanuts, lime, sweet basil and mint, and of course, Beerlao.

In general, everything that’s been on my plate so far in this place has been delicious, and really cheap. The exceptions being when I have tried to eat “Western style” food, including some really stale pastries.

Ok, enough about food, here are a few pictures: 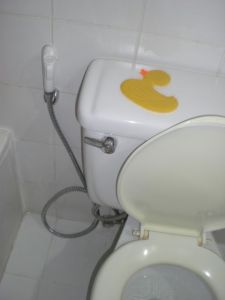 Since I’m writing about stuff going in one end, I might as well write about things coming out the other. In Laos most people don’t use toilet paper, instead there are these spray hoses next to most toilets. You use the hose to spray yourself down after you eliminate. I’m not sure exactly how effective these hoses are, but I have noticed that people generally wash their hands very thoroughly after using the toilet.

I took some pictures on campus today, here is me in front of the Central Library. It looks pretty tropical and beautiful huh? It is. This is where I work everyday. I will take more pictures soon. And eventually I will work up the courage to ask some monks if I can take a picture with them. I saw some in the library today… browsing the stacks. But I will write more about monks later.