Well, it’s the 2nd to last day of 2011 and I have been thinking that it would be a good idea to post my favourite new musical discoveries of 2011 before Pitchfork comes out with their “Best of 2011” list, to see if there is any cross-over.

I must stress that this list is not restricted only to songs released in 2011, but rather songs I discovered in 2011.  So, it’s completely personal and not a remotely objective attempt to summarise this year in music on a general level.

I know what you’re thinking.  “Nicole, this list has a lot of similarities to NPR’s All Songs Considered Listeners’ Picks of 2011 show.”  It’s true.  I don’t claim to be original in any way.  I have to find out about new music like everyone else.  And, it’s easier to let other people with similar taste to mine put the effort into weeding through all the shit and identifying what is actually good.

So, without further ado, here is the list of my 2011 musical discoveries, and, if you want to download the songs, you can do so here. 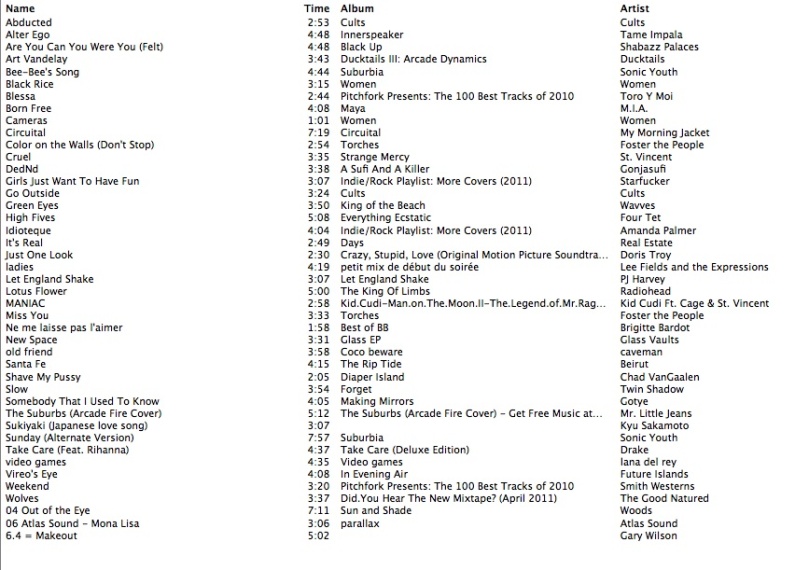 I suppose for the title of this post to be accurate, I should discuss the rest of 2011, rather than just music that was new to me.

As far as other entertainment, I have really enjoyed discovering the following TV programs as well:

And, George R. R. Martin’s fiction.  I wasn’t crazy about Freedom by Jonathan Franzen or A Super Sad True Love Story by Gary Sheytngart, which, to be honest, are probably the only other novels I have read this year.  Oh wait, I also read Alias Grace by Margret Atwood, On Chesil Beach by Ian McEwan and the Coroner’s Lunch by Colin Cotterill.  Sadly, that may have been everything, though I think I am forgetting a few.  8 books isn’t epic, but maybe better than some?  Especially considering at one point I had more than 37 books on loan from the VUW library for school related reading.  Honestly, for most of this year the last thing I wanted to do was come home and night and do more reading.  Hence my interest in TV the last 12 months.